Seeking the assistance of some existing pattern makers in terms of what would be needed in terms of basic blocks for dance-wear.

Years ago , I did see a mid 80’s swim/sportswear block in a book, that might work for this, but as I recall you have to allow a degree of ‘shrink’ in the pattern to accomodate the stretch in the fabric. ( something I am not sure Valentina can do currently)

The ‘shrink’ is calculated in the formulas, not affected by choice of using paper or software to create the pattern.

Please state if you are willing to pay for this, or if you want these patterns made for you for free.

I was asking what basic blocks would be needed so I have some idea where to start looking, on my own efforts. I don’t have the money to pay pattern-makers, and it seems unreasonable to expect other people to make patterns for free on something that would be rather specialised.

I’m just wondering… are you working with patterns on a mostly intuitive level, rather than the mathematical one that is used in pattern drafting? Like, you have a pattern in front of you and you alter it as needed, rather than drafting one from scratch?

I’m asking because your answer to this will be very helpful in figuring out how to help you draft the patterns with Valentina.

I was working on a partly intuitive approach based on the measures available in Valentina, and there nominal relationship. I hadn’t yet found a suitable ‘one-peice’ block to draft from, meaning that I was working from scratch based on what I could recall about designs I had seen. My first attempt did not look right.

I had found one for the back/front parts on a Google search but annoyingly the site it came from was a dead link so it’s numbered but no instructions(https://s-media-cache-ak0.pinimg.com/236x/bc/da/6f/bcda6f5783a36920fb12e2ec3f8c535d.jpg).

(Aside: I note that in the version of Valentina I have currently It’s not possible apparently to have numeral digits as marker names ( I am assuming this is a limitation of the engine, and that F1, F2 etc B1, b2 can be used instead.)

There’s no sleeve pattern, but that should be straightforward to determine, based on the basic sleeve blocks, elsewhere.

My notes on basic ‘dancewear’ blocks was something like this…

(These are based on what’s normally considered Dance-wear specfic items as opposed to clothing worn for dance generally). There may be some overlap with the blocks here with those for swimwear and sports.

Females: "One Peice Block (Front/Back) - scoop neck. ( A turtleneck would need a slightly different approach based on what I can recall, and I’ve not seen patterns for this.).

I am not currently sure what dance skirts look like, but I seem to recall that the archetypal tu-tu is essentially a short layered flared skirt. Alternatively it’s a variant on something called a skating skirt ( but I’ve not seen that term used in pattern making.)

Male: (based on what I count as Dancewear, I am of course aware that in many forms of dance, what’s worn is not that different from normal street patterns.)

The lower half for a male dancer, is (typically) either tights/leggings (so breeches) pattern, or it’s a tweaked trouser/pants design IIRC.

The top part can be a *basic T shirt-top , *an extension of the lower portion, forming a sleeveless one peice with legs.

There are various jacket forms used for ‘performance costumes’, but some more prominent ones I’ve seen seem to have widened shoulders, a shorter front/back length (above the waist) . Also because of the need for waist flexibility , male jackets in dance I think may also have shorter skirts(talioring term) which are slit higher than would be comparable in a normal draft.

Catsuits/Skinsuits are pattern wise mostly unisex unless they need to be closely fitted, the female pattern naturally having to take into account the need to put in darts to accomodate a bust line. (Drafting a fully seamed catsuit is as I understood rather complex)

These are however my notes from memory, and could be wrong, hence my enquires.

I’m also bearing in mind, that for some dance/theater costume situations, I might be drafting some really unsual combinations. (Like with a pattern for a ‘drag’ costume, I’d essentially be drafting a fuller figure female style, on male measures, with a much broader shoulder line than normal)

I was seeking comments on these so that myself (when i have the time to learn the software more fully.) and others can help create the resources that the community of users want.

I don’t have a pressing deadline for any actual draft/design, and welcome being able to help shape a design arrived at by community consensus (even if the measures would be highly individual).

The intention is that in the distant long term, Valentina has standard “free” libraries, given that most current patterns in this area proprietary (and why I was transcribing an older pattern book elsewhere.).

Hey, as you might already know, your photo is from a site named PatternSchool, which disappeared from the net some time ago. Perhaps you can get in contact with Pia from this site: http://overflowingstash.com/2015/02/24/stretch-pattern-school-block-experiments/

She seems to have some more information about this pattern, perhaps she can help…

Ok I see. Basically, I think your best bet in terms of learning how to make these patterns yourself is

I’m aware that drafting patterns is quite tricky, and that learning this drafting from scratch business takes lots of time. Though, if you’re into sewing and costuming, it’s probably worth to learn.

A good sort of place to look for people who can help draft and share might be cosplay forums (some people have an incredible ability to get the look just exactly right). 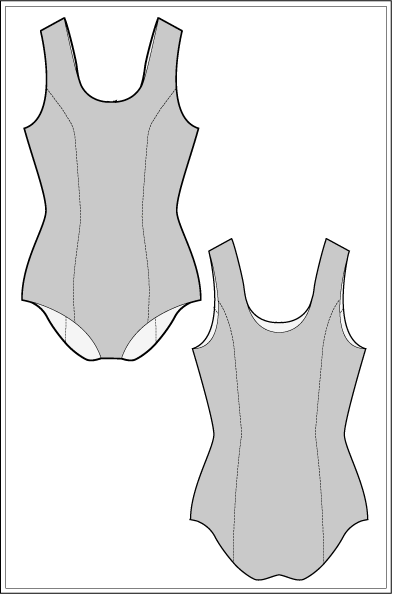 Ralph Pink. com is giving away a free sewing pattern - Start making your own swimwear with this basic block

Ralph Pink. com is giving away a free sewing pattern - This is a a lovely example of vintage swimwear at its best.

@245oldsalty Many thanks for the links! Very interesting!

Well I checked that link again recently, and it seems the original site referenced by overflowing stash is no longer online, which is a shame.

FWIW, many pages that are gone are still available on archive sites. Here is the easiest way to check:

Now, whenever you come across a page that is 404 or outright gone, try clicking on your new bookmarklet and see if it was archived.